For certain mixtures, reactions can be used to determine the relative composition of a mixture. This is illustrated in the following video.

On another page, we talked about using elemental analysis as a qualitative analysis technique. In that case, we had a pure mineral and we wanted to determine what type of mineral it was. By performing an elemental analysis, we could determine the empirical formula. This can tell us, for instance, whether the mineral is As2S3 or As4S4, or something else. That approach is very useful if you think you have a pure mineral. But let's say we have a sample that we know is a mixture of two substance, such as As2S3 and As4S4. What experiment can be done to determine the relative proportion of each of these substances in our sample?

I can take a chunk of the sample and weight it. Let's say I weigh a piece of sample and find it has a mass of 13.86 grams. I then know the total mass of the mixture, but I don't know how much of it is As2S3 versus As4S4.

This is another example where chemical reactions provide a useful basis for an analytical chemistry technique. If I burn the sample, the substances react with oxygen to produce SO2 gas, leaving As metal behind. The experiment I'll perform is to burn my 13.86 grams of sample and measure the amount of SO2 gas that comes off. To see why this may be useful, consider the way that each of these minerals reacts with oxygen. The balanced reactions are shown here:

Let's say I do this experiment and my 13.86 grams of sample produces 9.23 grams of SO2. What do I do next? I don't know how many grams I have of each of these substances, I only know the total mass of the mixture and the amount of SO2 produced. This is a pretty complicated problem, and one where algebra turns out to be very useful. What algebra allows me to do is introduce a variable (let me call it x) that precisely captures what I don't know. I then write all the information I do know in terms of this unknown x. If all goes well, meaning if I have enough information from my experiment, I'll end up with an algebraic expression that I can solve for the unknown x.

The first choice I need to make here is to precisely define my unknown. Let me choose to say that x is the mass of As2S3.

If I knew this value, I would know everything about the sample. Before doing the algebraic solution, let's see what would happen if the sample contained 1.00g of As2S3. In other words, let me assume that the value of the unknown x is 1.00. 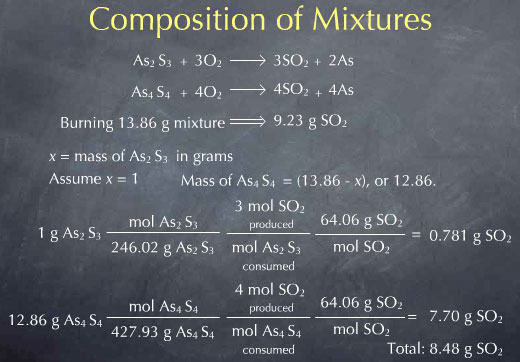 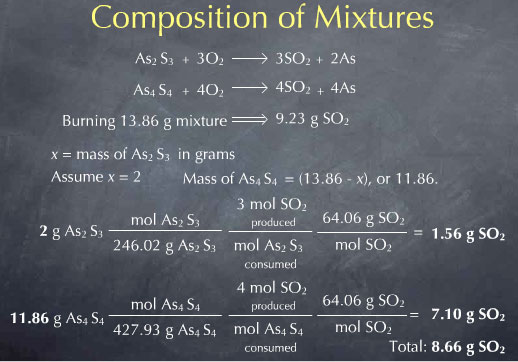 This is still not equal to observed 9.23 g of SO2 collected experimentally. I could keep guessing at the mass of As2S3 present in the sample until I get the observed 9.23 g of SO2, but it is much easier to use algebra. As mentioned above, algebra allows me define an unknown x, write everything I know in terms of this unknown, and then solve for x. 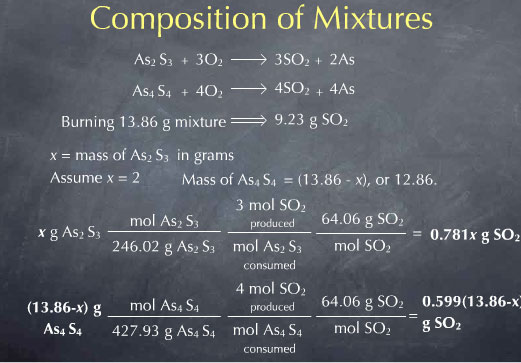 I now now the total amount of SO2 produced by burning the mixture, in terms of the unknown x. Experimentally, I collected 9.23 g of SO2, so I can set this algebraic expression equal to 9.23

Solving this for x gives x = 5.10. x referred to the mass of As2S3 present in the sample, so I now know that my mixture contained 5.10 grams of As2S3. The remainder of the 13.86 total mass, or 8.76 g, must then be As4S4. I now know everything I wanted to know about the sample. I can check my result by calculating the amount of SO2 produced by this mixture, and I see that I predict the observed 9.23 g of SO2. 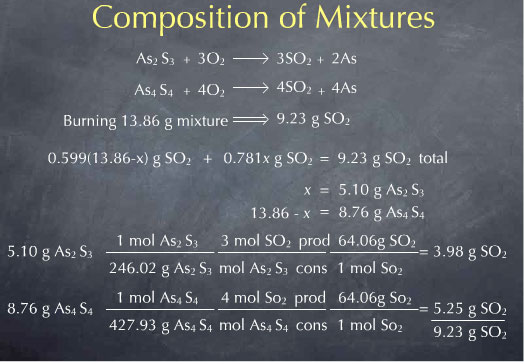 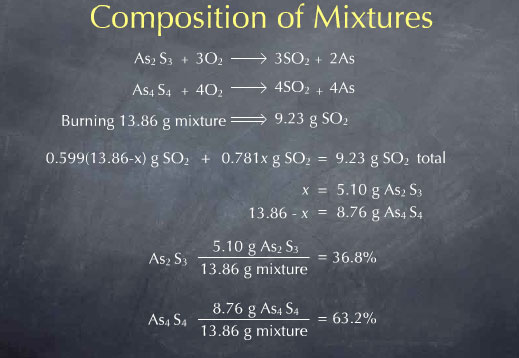 You may now try the following tutor on solving problems relating to mixtures.