We are now ready to pull everything we know about reaction stoichiometry together, and answer the question: Given some initial amount of reactants, what should be present after a chemical reaction goes to completion? The procedure for answering this question is often called the "limiting reagent problem." You'll see why this name is appropriate in the following video.

Earlier, we were working with the reaction:

What do I have in my solution after this reaction occurs? The reaction is going to continue until something runs out. For every molecule of Pb(NO3)2 that goes away, I'm going to lose two molecules of NaI. So eventually I will run out of either Pb(NO3)2 or NaI . If I mix stoichiometric proportions (9.05 g NaI with 10.0 g Pb(NO3)2), then both compounds are used up at the same time, but in the more general case, I need to first figure out: which reactant runs out first, Pb(NO3)2 or NaI?

We call the reactant that runs out first, the "limiting reagent", so a chemist would rephrase this question as: What is the limiting reagent, Pb(NO3)2 or NaI?

To figure this out, we'll recast it as two separate questions.

I then ask the same question for the other substance: 2) How much PbI2 would I get if NaI is the thing that runs out first, that is, if NaI is the limiting reagent?

The substance that gives me the smaller amount of product is the one that will run out first. It limits the amount of PbI2 I can form, and so it is the limiting reagent. 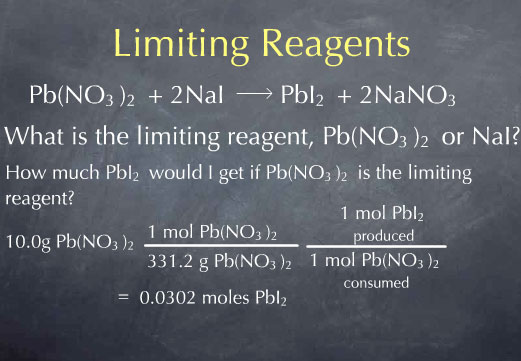 Now, I'll do the same for question 2, regarding NaI. I take my initial 10.0 g of NaI and use the molecular weight to convert from grams to moles. I then look at the chemical reaction and see that for every 2 moles of NaI consumed, 1 mole of lead iodide is produced, which leads to at total 0.0334 moles of PbI2. 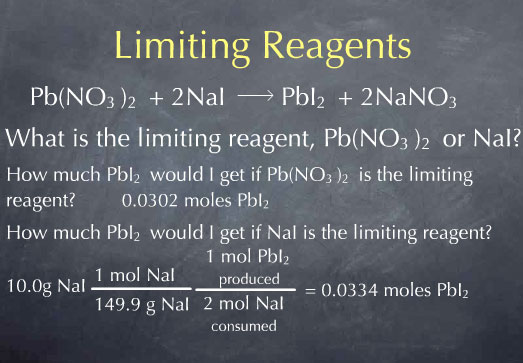 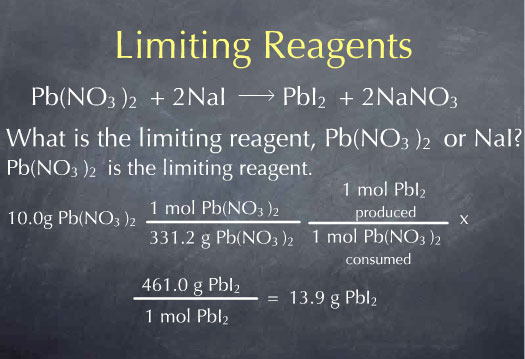 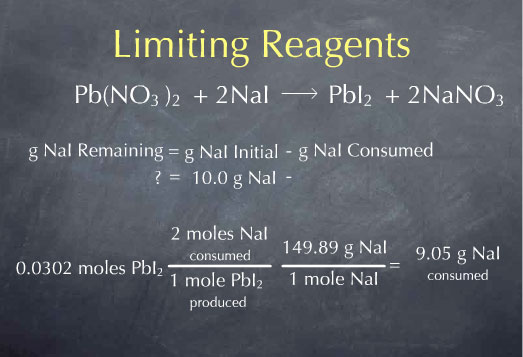 I now know the number of grams NaI consumed. If I subtract this from the grams of NaI I had to start with, I get 0.95 g of NaI remaining. 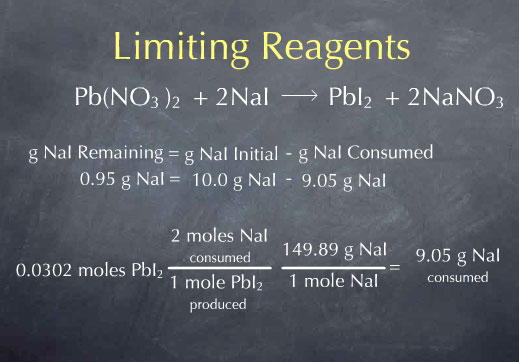 Finding the limiting reagent has helped us achieve our goal of finding out what was left over after the reaction completed.

Use this information to answer the questions below.

You may now try a tutor on determining the chemical remediation of arsenic.