Consider the reaction: A2 + B2 <---> 2AB The reactants are mixed together and the following is a plot of the reactant and the product concentrations with time:

what is the value of the equilibrium constant?

If the density of graphite is about 2 g/ml and that of buckyball is about 1.5 g/ml, in which direction would the application of high pressure drive the equilibrium?

Consider the gaseous equilibrium: H2(g) + I2(g)<---> 2HI(g) The sketches below show the pressures, P, of these three gases as a function of time during an experiment. The system is initially at equilibrium. At some time, t, extra I2 is added. Which of the sets of curves shows how the system will respond to this situation? 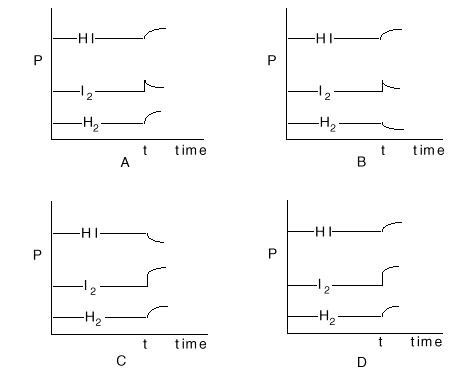